Whether or not we support the trapping of wildlife, we must acknowledge the potential threat to non-targeted animals such as endangered/protected species and pets. Traps do not discriminate and can cause egregious injuries, some of which are often fatal.

Animals trapped in Nevada may suffer for up to 96 hours before trappers are required to check on them. Enforcement of the minimal trapping regulations that do exist is rare, so helpless victims are subject to the elements, pain, hunger, thirst, fear, and predation. Cubs or pups who are too young to survive on their own can become orphaned, and a mother may chew off her own limb in desperation to free herself so she can return to her young. Companion animals, such as cats and dogs, have been injured or killed as well via strangulation or mutilation.

In 2017, Nevadans supported reform of the state trapping regulations to reduce the suffering of wildlife and protect companion animals and public safety. However, in 2019, the public call for a shorter trap check time and a ban on leg-hold traps was ignored in deference to trapping interests, even though fewer than 1% of Nevadans buy licenses to trap.

While some states have either banned traps, restricted their use, or limited the trap check time to 24 hours, Nevada is not among them.

It’s important for the public to get involved so we can reduce the number of tragic outcomes for animals: Watch for hidden traps when hiking and report any incidents to local law enforcement and the Nevada Department of Wildlife. Report any illegally set traps on private property and post signs forbidding them. Spread the word about trapping on social media and ask friends to take similar action. Express opposition to trapping in letters to the editors of local newspapers and to lawmakers.

Contact the following decision makers, indicating opposition to cruel trapping in Nevada and asking them to ban leg-hold, snare and body-gripping traps. Insist that the trap check time be reduced to 24 hours and that regulations be enforced.

Contact Animal Protection Affiliates to get involved in our campaign: 702-650-3511 (speak clearly and leave your name and call-back number)

Our partners at Animal Kindness Foundation, Project Coyote, Wild Earth Guardians, Nevada Wildlife Alliance, and TrailSafe Nevada are working on this issue and we need YOUR voice! 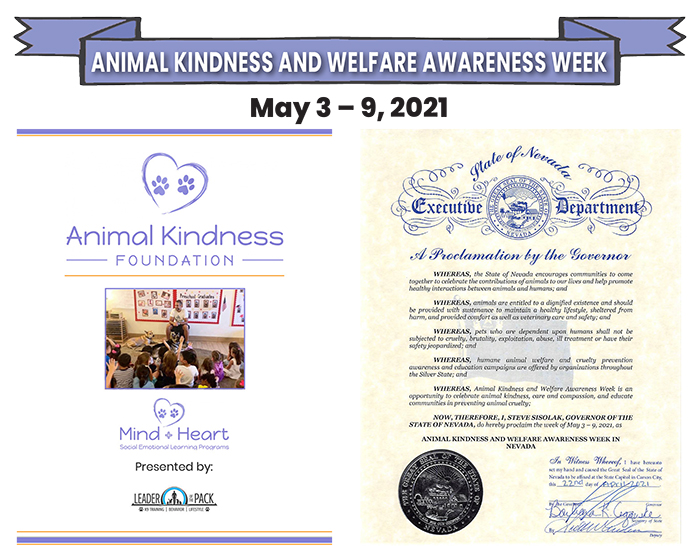 Nevada Governor Sisolak proclaims May 3-9, 2021, as Animal Kindness and Welfare Awareness Week. The proclamation asks all Nevada citizens to extend kindness, compassion, concern and support for our companion animals. The proclamation draws attention to ways of being a responsible companion animal family, to properly care for their well-being, including spay and neutering all companion animals to prevent overpopulation, to protect them from harm and neglect and provide basic needs every day of their lives. Animal rescue groups, animal welfare workers, law enforcement and advocates work tirelessly every day to keep animals safe and healthy, out of harm’s way until a forever home becomes available. The goal of the proclamation is consistent with the goal of the Animal Kindness Foundation to change the way animals are valued and treated so they can enjoy a happy, healthy life in a safe environment.

Today and every day we celebrate animals as sentient beings who bring joy and happiness to our daily lives. They are a source of companionship, entertainment and an endless source of unconditional love. As we thank our companion animals for all they give to us, take time to reflect on how we can give back to them. Please show them kindness, compassion, concern and care as we celebrate Animal Kindness and Welfare Awareness Week in Nevada, the first week in May every year.

The Animal Kindness Foundation is dedicated to the education of our community’s youth through their Mind + Heart social emotional learning programs, encouraging learning through humane education, advocacy and service. Their family-focused community outreach programs support keeping animals healthy, happy and well homed. The aim is to reduce the number of animals that end up in shelters and enhance the quality of life for all.

Support the Animal Kindness Foundation, a 501(c)(3) non-profit organization. By participating in the programs, volunteering, donating or simply spreading the word about the programs they offer, you support the thousands of animals, and people they serve.

The Animal Wellness Action-sponsored measure also earned support from the Sierra Club Toiyabe Chapter and the Center for Biological Diversity.

Nevada’s neighboring states have banned these contests in recent years  which has driven contest participants and organizers to flock to Nevada, one of the last states in the Southwest that allows these contests to persist. In these contests, shooters head out at dawn to kill as many coyotes, fox, rabbits, bobcats, or other small mammals as they can, to win prizes such as belt buckles, guns, or monetary awards. They typically throw away the animals and leave lead ammunition strewn on public lands for other wildlife to ingest. The spent lead ammunition courses through the food chain, poisoning and killing abundant and endangered wildlife alike.

The killing happens across the entire state and participants are encouraged to kill on public lands such as BLM and USFS lands. Recently, competitions have migrated to an app-based system where a virtual check-in system allows for “anyone with a smartphone” to compete which allows killing to occur anywhere.

This is the first successful attempt to condemn these contests in the state of Nevada. In 2015, the Wildlife Commission voted 7-1 to deny a petition that sought to end these competitions. However, support for banning these contests has grown with few Nevadans wishing to have their state known as the only one to permit these events.

“With the passage of this historic resolution to condemn the scourge of Wildlife Killing Contests in our state, Nevada has been put on the path toward joining the bevy of other states that have already eliminated these barbaric practices,” Annoula Wylderich, Animal Wellness Action’s Nevada State Director, said. “This resolution galvanizes the movement to ban contest killing, which rewards participants for killing the most, the heaviest, and the smallest of a given species and is not sportsmanship.”

“With this vote, the Clark County Commission took a leap forward to protect residents and visitors to our state who use our extensive public lands for hiking, rock climbing, and other outdoor activities that require a healthy environment,” Shelbie Swartz, a wildlife advocate working with Animal Wellness Action, said. “As a Nevadan, I believe it is my responsibility, and the responsibility of all my neighbors, to stand up for our wildlife and our lands. These contests are cruel, not representative of ethical hunting, not conservation, and not a recognized wildlife management tool.”

“With this resolution, we send a signal to the Nevada Department of Wildlife that Clark County, the most populous county in Nevada, stands against cruel killing contests, and uphold scientifically-based wildlife management programs,” Commissioner Jones said. “I am proud to have sponsored this resolution, which will help to ensure that the public is safe from stray bullets by unethical shooters in a hurry to kill as many animals as possible and protect our state’s wildlife from inhumane practices and unnecessary slaughter.”

The Las Vegas Pet Scene Magazine is dedicated to the Pets of Las Vegas and the people who love them! We love the animals or pets we’ve invited into our hearts and homes and who have become family. We, however, love all animals and though we can’t invite them into our homes, they occupy a space in our hearts and we are concerned about their well being and welfare. Periodically under the Animal Welfare tab we’ll post items of interest, concerns and “Calls to Action”.

Five Freedoms form the basis of Animal Welfare and list the five fundamental freedoms which every animal is entitled: These were formalized in 1979 by the UK Farm Animal Welfare Council and have been adopted by many professional groups including the ASPCA. It is based on the belief that good animal welfare includes both physical fitness, a sense of well being, and a life worth living from their point of view.

According to the Humane Society the United States is closer to ending unnecessary cosmetics testing on animals since Illinois became the third U.S. state to enact a marketing ban preventing companies from selling cosmetics that have newly been tested on animals. On August 9, Illinois Governor J.B. Pritzker signed into law a bill that prohibits the sale of cosmetics like shampoos, lipsticks and deodorants unless they are cruelty free.

California and Nevada also have similar laws. Starting January 1, 2020, all cosmetics products on store shelves in these three states will be free of new animal testing. According to Cruelty Free International Hawaii, Maryland, New Jersey, New York and Virginia are also considering a ban on the sale or import of cosmetics that have been tested on animals.  Advocates argue that animal testing on rabbits, mice and rats is cruel and outdated.

November 5, 2019:  The Senate has unanimously passed a bill that makes animal cruelty a federal felony. Under the PACT Act, which stands for Preventing Animal Cruelty and Torture, a person can be prosecuted for crushing, burning, drowning, suffocating or impaling animals or sexually exploiting them. The bipartisan legislation passed the House of Representatives in October. It was presented to the President for his signature on November 18th.

March 2019:  Exciting news from the state of Ohio – Senate Bill 86 makes shelter pets the official state pet in an effort to raise public awareness. Five other states have rescue or shelter pets as their state pet: Colorado, California, Georgia, Illinois and Tennessee. According to the Humane Society of the United States Texas and Oregon are also considering this designation.

Ohio was also in the news in October 2018 for passing a new anti-puppy mill law (HB506) which is one of the strongest laws nationally dealing with puppy mills. It establishes standards of care for commercial dog breeding. The law deals with the sizes of cages and kennels, states that dogs must have daily exercise and enrichment activities. Dogs must be kept in a clean environment and be provided with good food and water. It mandates routine veterinary care, limits the number of times a female can be bred, and that only healthy dogs can be bred. In addition it requires retailers selling puppies in Ohio to get them from breeders who meet the strict standards.

In 2018 Ohio ranked as the second largest puppy mill state in the country. With the passage of this bill Ohio is becoming a leader to help bring the end to puppy mills and animal cruelty in commercial dog breeding.

This law is viewed as model legislation for governing animal cruelty with “backyard breeders”, puppy mills, and online sales of pets.  It establishes guidelines and standards for these activities.

The real key to eliminating these types of animal cruelty lies with the consumer or the purchaser of puppies and pets. It is based on supply and demand. There is a huge supply of shelter pets available; we must all do our part to increase the demand for shelter or rescued pets. First, it is important to increase public awareness of the reality of puppy mill cruelty. A good start is to share the horrors of puppy mills with our family, friends and contacts. Second, promote and encourage adoption will help increase the demand for rescued pets. Share the joys and benefits of pet adoption on your Facebook and social media pages to change the perception that shelter pets are damaged! 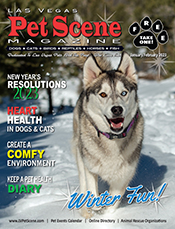