History of Military Dogs and Honoring Them

Memorial Day is a day we set aside to pay tribute to all of those who have served and sacrificed to protect our nation.  Our brave men and women put their lives on the line for us to preserve our freedom and ensure our safety.  Thankfully, they are not alone in this fight.  Our military dogs stand alongside our troops, displaying the same loyalty and commitment we value in them at home.  Trained to maximize their natural canine senses and skills, these dogs contribute a unique skill set that humans cannot match.  Their ability to sniff out poisonous gas, bombs and weapons, has made them a military partner like no other.  These skills, combined with their loyalty and dedication, have made our military dogs an invaluable asset to our troops.

Today we have approximately 2500 military service dogs, with the majority of them comprised of the larger breeds –German Shepherds, Labradors, and the somewhat smaller Belgian Malinois.  They are selected based on their gift of focus, level of aggression and excitability. The most important requirement is that they must be loyal enough to do what they are asked to do, even when that request knowingly puts them in harm’s way.

One such touching story of loyalty and bravery involves Layka, a German Shepherd who risked her own life for that of her handler and her fellow soldiers.  In Afghanistan, 2013, Layka was sent into a dangerous building ahead of her platoon to confront the enemy and attack those that she could.  Even though she was shot 4 times at point blank range, Layka was still able to subdue her shooter and save the lives of her handler and the rest of the accompanying soldiers.  After seven hours of surgery and an amputated front leg, Layka survived and was adopted by her loving handler, Staff Sgt. Julian McDonald. Layka is now retired and enjoying the rest of her days at his home with his family. 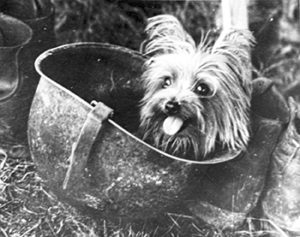 For the majority of military missions, a large-breed dog is a necessity.  But in certain situations, a small dog is exactly what is needed.  Proving to be just as loyal and brave, these small dogs bring an entirely different set of skills to the table.  In WWII, a small dog named Smoky (a female Yorkshire Terrier), was instrumental in stringing communication lines under an airfield in the Philippines.  The only access from an American airfield to 3 other squadron areas was inside a small culvert running under a runway that was being bombed on a daily basis.  The culvert was only 8 inches in diameter with a length of over 70 feet.  Smoky was the perfect fit.  With the lines secured to her tiny body, her handler, Cpl. Bill Wynne called to her from the far end of the culvert and coaxed her through it.  Even though many parts of the culvert were filled with mounds of sand, Smoky was persistent at the task that was asked of her.  In a matter of minutes, Smoky emerged from the other end of the tunnel with the communication lines trailing behind her.  After serving 18 months of combat and continued service as a therapy dog for other soldiers, Smoky safely returned to the States and died peacefully in 1957.

On this Memorial Day, let us all give a heartfelt thank you to those who have given their lives and have sacrificed so much for our nation.  Among those individuals and families we have to thank, let us not forget those amazing, brave dogs that have made that same unselfish sacrifice.  We salute those that have passed and those that continue to fight, defending our freedom.