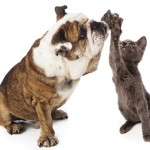 2015 was a good year for animals – France, New Zealand and Quebec either created or changed their laws to reflect that all animals are sentient beings who feel emotion and pain. They are able to feel fear, sadness, pleasure, anxiety and love.

All animal lovers probably believe this to be true and do not require further evidence as proof. These changes, however, are exciting and evolutionary – they are definitely steps in the right direction. They reflect the changes in the way animals are being viewed:   as “beings” rather than as property or possessions.

Additional Information:
New Zealand:  “To say that animals are sentient is to state explicitly that they can experience both positive and negative emotions, including pain and distress,” said Dr. Virginia Williams, chair of the National Animal Ethics Advisory Committee, New Zealand. “The explicitness is what is new and marks another step along the animal welfare journey.”

“Expectations on animal welfare have been rapidly changing, and practices that were once commonplace for pets and farm stock are no longer acceptable or tolerated,” said New Zealand Veterinary Association president Dr. Steve Merchant.  “The bill brings legislation in line with our nation’s changing attitude on the status of animals in society.”
http://www.trueactivist.com/new-zealand-now-recognizes-all-animals-as-sentient-beings/

France – On 28th January 2015, the French National Assembly voted in favor of an amendment which modified Civil Law in the country. In response to the move to recognize the sentience of animals, Mike Baker, Chief Executive of World Animal Protection said: “We wholeheartedly congratulate France on the passage of the new amendment which formally establishes what we already know in our hearts: animals are ‘living, sentient beings’ that deserve protection. Recognizing that animals can feel pain and distress is an important step in preventing their suffering. This vote by the French Assembly will help ensure that animals are able to have a good life.”
http://www.worldanimalprotection.org/news/we-welcome-frances-recognition-animal-sentience

Quebec:  The Quebec national assembly passed legislation that better protects animals and defines them as sentient beings. Agriculture Minister Pierre Paradis, who spearheaded Bill 54, is hoping it will help transform Quebec into a tough animal welfare jurisdiction. The bill states that “animals are not things. They are sentient beings and have biological needs.” For many people, that might seem obvious, but until now an animal in Quebec has had the same legal rights as a piece of furniture.
http://ottawacitizen.com/news/national/quebec-says-animals-are-sentient-beings-in-new-protection-legislation