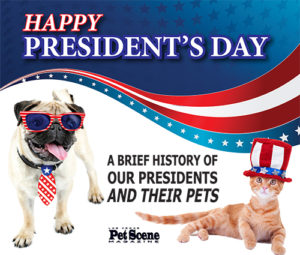 Celebrating Presidents’ Day
Presidents’ Day originally was established in 1885 to recognize President George Washington. The day is now popularly viewed as a day to celebrate all U.S. presidents past and present.

It gives us an excellent opportunity to learn more about our presidents and their pets. It is interesting to learn about the variety of pets that were part of their lives. Since 1800 the White House has been home to more than 400 animals including cats, dogs, alligators and others. We often view our presidents only as historical or political leaders. Learning about them as pet parents and animal lovers offers us a glimpse into the lives of the men, women, and children who occupied our nation’s capital.

Our Presidents and Their Pets
President Washington, known as The Father of Our Country is also considered to be the Father of the American foxhound. In addition to his 36 dogs he also owned and loved horses. The Washington household also had birds; one parrot in particular was a favorite of the first lady. Polly often spent time sitting with Mrs. Washington even when she was entertaining guests.

President Lincoln was the first president to bring a cat into the White House. When he assumed office and traveled from Illinois to the White House, his son, Tad, asked his father to bring his cat (Tabby) along. President Lincoln agreed. He loved all cats and could play with them for hours. Once when a reporter asked Mary Todd Lincoln if her husband had a hobby she replied simply, “cats”. We know that Abraham Lincoln owned at least 2 dogs, Fido and Jip. A book by Matthew Algeo, Abe & Fido: Lincoln’s Love of Animals and the Touching Story of His Favorite Canine Companion depicts Lincoln as a deeply compassionate animal lover and shares the story of his favorite dog, Fido.

President Coolidge had a “personal zoo” that included more than 26 pets, including a bobcat named Smoky, six dogs, a goose, a donkey, a cat, an antelope, a wallaby, and two lion cubs called Tax Reduction and Budget Bureau. He also had a pair of raccoons called Reuben and Rebecca. Reuben didn’t like being around people but Rebecca loved posing for photos. Calvin often took her on a leash for walks on the grounds of the White House. Another one of his popular pets was Billy, a pygmy hippopotamus. Billy was donated to the Smithsonian National Zoological Park.

President Theodore Roosevelt’s household consisted of six children and numerous pets including a bear, badger, pony, hyena, pigs and birds. Guinea pigs were part of the family and President Roosevelt felt they made perfect pets for his children. The guinea pigs often were seen playing with the children outside on the White House lawn. One of the guinea pigs lived in a cage with Peter the rabbit. Sounds like a typical household of pets and children!

White House Gators!
The White House was home to three alligators – one was given to John Quincy Adams by the Marquis de Lafayette and lived in a White House bathroom. President Adams enjoyed scaring his guests with his unusual household pet.

Though President Hoover and his wife, Lou, were dog lovers, their son, Allan Henry, had a pair of alligators as pets. Normally they were kept in a bathtub but often escaped and were seen roaming the grounds of the White House. The alligators were eventually donated to the Smithsonian Zoo

Guess who had a Doggie birthday party in the White House. President Harding and his family had a birthday party for their dog Laddie Boy. The guest list included other dogs. A dog biscuit cake with frosting was served. Just a typical family celebrating the birthday of a family member!

I identified with President Lincoln and his love and enjoyment of cats. The image of guinea pigs and children playing on the White House lawn warmed my heart. I would have loved seeing President Coolidge walking his raccoon. Our presidents and their families indeed were pet people!

See the following for more interesting tales of pets and presidents plus photos:
http://www.presidentialpetmuseum.com
http://www.history.com/news/history-lists/9-presidential-pets