↓
Home Menu ↓
Skip to primary content
Skip to secondary content
Home→Blog→Uncategorized→Feline behavior – is it influenced more by Nature or Nurture?

Have you ever wondered about your cat’s personality and behaviors? I have! Ever since I adopted Rowdy, a cute affectionate kitten, I’ve wondered about that age-old scientific nurture vs. nature debate about animal behaviors. A cat’s nature is the temperament and personality that they were born with. Other behaviors are learned or acquired by training and nurturing.

I decided to do some reading and found that a lot has been written about this topic. Each cat is an individual but it seems that there are common traits that have a genetic basis. There are certain innate characteristics based on the breed. The term “domestic” cat is used to describe cats of unknown breed; they can still have characteristics and traits based on their breed mix. For example, Persians are affectionate and love sitting on your lap. Siamese cats communicate with their “meow” and body language.  Another breed that is popular is the ragdoll. Their most adorable trait is that it goes limp when it is picked up. They’re considered to be the most affectionate, gentle, and huggable cat you could get. 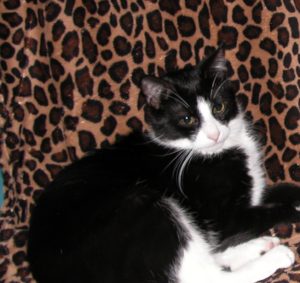 Let me share a little bit about Rowdy. He was described by the cat rescue as a little “love bug” who loves to snuggle as fiercely as he loves to play. He’s a jumper and loves to flip his body in the air when he plays. He has dog-like characteristics like fetching and chasing toys. Orphaned as a young kitten, he was bottle fed and fostered by a family who had two young boys.

Were his cute yet unusual personality traits due to his early nurturing? Every morning I hear him in the litter box scratching the side for about five minutes. He knows he is supposed to scratch but he doesn’t know why he is scratching. He hops out leaving his poop uncovered. Fortunately for him, Solly, his adopted brother hops in and covers it for him. He didn’t have a mommy cat to teach him Litter Box Basics 101. He is an explorer and I often find him on high shelves sharing space with many breakable items. My attempts to get him before he knocked items off the shelf were met with a limp cat. My guess is that he is part Ragdoll. He truly is the most huggable cat I’ve ever had.

There is also some evidence that suggests that coat color is linked genetically to temperament and traits. This was extremely interesting to me since Rowdy is a Tuxedo cat. This isn’t a breed but a color pattern that is found in almost all types of domestic cats. Tuxedos have an outgoing personality; they’re relaxed and have dog-like in personality traits (that fits him perfectly)

Another popular cat is the Ginger Tabby. This cat is not a breed either but a color coat pattern. They are also called orange tables. They are usually easy going and friendly, they like to be stroked and petted but dislike being held and cuddled. This fits my older cat, Solomon, perfectly. He is my sensitive, shy gentleman. He loves to lie beside me but hates it when I try to pick him up to hold him. At first, I thought Solomon was having problems bonding with me because of trust issues. I adopted him after his second rehoming experience. I expected him to become more huggable after a period of adjustment. Recognizing that it was probably due to his nature rather than a bonding failure helped me relax and enjoy this handsome companion cat without putting unrealistic expectations on him.

Learning more about our cats helps us appreciate their unique personalities and character traits. ©LVPSM 2017